As wikipedia states nicely, “ZigBee is an IEEE 802.15.4-based specification for a suite of high-level communication protocols used to create personal area networks with small, low-power digital radios.”

It’s a rather simple way to transfer data from a bunch of wireless sensors distributed in your house. Another very important characteristic is its true mesh routing, allowing a more resilient architecture.

The one thing you need to understand how a zigbee network works is it relies on a PAN ID which is unique for a given group of nodes, and a node can play 3 roles:

Here is an example: 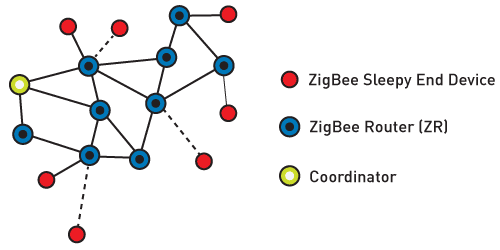